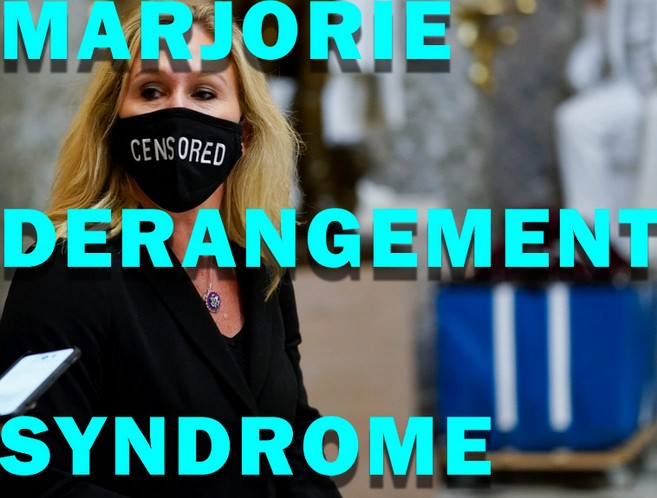 The Left in America will never be satisfied.
By all accounts they have gotten everything they’ve wanted: Biden is in the White House. They control the narrative. They’ve successfully purged a great many of their opposition from social media and increasingly, from their jobs in academia, government & military. Trump himself has said barely a word since Twitter, Facebook & other Big Tech minders deplatformed him.
In Florida, ‘officials’ (I have to put that word in quotation marks) are trying to figure out a way to eject Trump from his Mar-a-Lago home using housing bylaws, and the last I heard two banks had notified him that they no longer intended to host his funds. They will likely never, ever leave him alone again.
But the Left are not only focusing on Trump. They’ve now turned their Hate Machine on a newly elected Representative named Marjorie Taylor Greene.
They call her the ‘Qanon Candidate’ because of her previous media posts & attendance at a protest where she was on the ‘wrong’ side of the issue. They twist her words, they relentlessly namecall, they stalk her twitter, they make her the subject of late night talk show mockery & derision, they attack her and then claim to be the victim. You know. The usual.
Recently a guy called George Conway took his turn smearing Ms. Greene. He said that she & Trump are responsible for the “moral decay” of the Republican party. Well.. that’s rich.
Mr. Conway is the last one who should talk about morals. Have a look through this slide show to see what I mean. (If it's too small you can view it in fullscreen mode.)
Ms. Greene appears to be a very strong woman and she would have to be to endure what they are putting her through. Yesterday they voted to officially censure her in Congress, removing her from the committee she was a member of and preventing her from performing the full scope of her duties for her constituents. It is a disgrace and will go down in history – as so much of our current moment will – as a breathtaking act of overt totalitarianism.
Keep her in your prayers.

Abram "Paul" Boone
Hi Polly,
I'm glad I found you again.
I don't know what you've been promulgating since I've not read any of your current stuff.
---- but in any case are you aware of Epoch Times and the CCP connection. I exposes all kinds of stuff related to CCP's plan to become the world super power, displacing the USA. It is very dangerous and of great concern to all us Trump people. Keep up the good work.

Tambra Haidon
As always, I really enjoy your content. I do not remember the title, but you did an outstanding piece on the Immigrant Restaurant in DC. Wow, that was incredible that you picked up on all that, and exposed all that was involved. I aspire to be an Amazing Polly! 😊. Currently working toward that, with a different name, of coarse, as there is only one Amazing Polly!

Tom
Been a follower for seeming years. Not surprised you attract clear/straight thinkers (e.g. The Helen B)

sheila
where did all your gabs go Polly? I went to check your page and it says there are no gabs?!

Michael Hoffman
I just looked at the title of this and new it would be good :)

Christine Allen
Polly....have you discovered In-Q-Tel yet? Mqy be worth a dig! As well as Robinhood CEO Vlad Tenev....if anyone can dig HIS history up it's you! Absolutely everything everywhere except that his 2 unknown parents that both worked for the World Bank immigrated here when he was in high school. Boy is HE a can of worms.....

Clint of Hawaii
Years ago I was a Body Guard to the Stars of Hollywood.
Wish I could protect Ms. Greene. Praying for her safety.

HelenB
So the party of total moral decay accuses Marjorie of lowering the tone of the Republican Party ... if it weren't so insidious you'd laugh your head off. Led by the most corrupt politician the globe has ever produced, with a history of leaders without any moral standards whatsoever, the Dems sadly have no self reflection ability whatsoever. I don't think I've ever encountered in my long life so much blatant corruption and lying, and seen it ignored by those whose profession it is to call out political corruption.
I'm now waiting for all the countries around the world who have used election voting tabulation machines to revisit their elections to see if they have been tampered with by the US alphabet agencies. I'd start with France.

Deb Shaw
I love you Polly. In another life we would be sisters. Hats off to you for your brilliance, strength and success. Your video “You Say You Want a Revolution” is outstanding! I have been a follower of Q since the beginning and I still trust the plan. WWG1WGA Trump is still my President.

Deb Shaw
I love you Polly. In another life we would be sisters. Hats off to you for your brilliance, strength and success. Your video “You Say You Want a Revolution” is outstanding! I have been a follower of Q since the beginning and I still trust the plan. WWG1WGA Trump is still my President.
1 2 Next
Recent Posts
Monthly Posts
Back to content