AmazingPolly.net
Published by Polly St. George in video recommendations · 1 February 2021
I've been having trouble sleeping and seeing.  Since shortly after the declaration of this "pandemic" my vision changed - not just once but many times.  I have three pairs of glasses I use in an unpredictable rotation and I feel as if I'm constantly looking for one or the other pair, which is not easy to do without being able to see properly.  These are old pairs and new pairs - one of them only has one arm, in fact, but I've been desperate enough to wear them out of the house at times.  I'm not sure what's happening, but it is stopping me from being as productive as I like to be.
That's one type of 'blindness.'
Another is touched on in this 10 minute video from a Roman priest.
He is walking outside in the evening and telling the world how he sees it - the depth of what we are facing, who is behind it and why.  He believes that we're in the end game of a 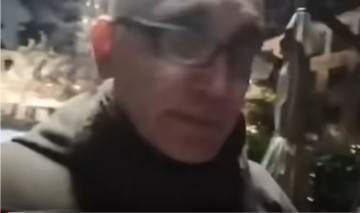 Masonic plot to control every place, thing, animal and person on this Earth. (I know many of you will agree).  I don't get too bothered about the "who" aspect of the equation, myself. Masons, Jesuits, Technocrats, Satanists, Communists, Marxists, Progressives, Rosicruicians, Illuminati... to me it's all the same. Those groups and so many more believe that they must invert the laws of nature and become Gods among men.  They are evil through and through, though I suspect a great many of them don't even realize it.  At this point the members have been groomed for generations so this is all they know. It's what they live for. Our failing, I think, has been to allow these cretins to slowly chip away at our own sense of virtue & righteousness in the name of 'tolerance.'  We forgot what it means to be discriminating because they made us afraid of being called names!  As if being labeled a bigot is worse than the slow decay of our society.
I've attached the video below - I found this priest compelling and wanted to share his message with you.  Some quotes which stood out to me are:
"We are in a very apocalyptic scenario.  It might be the final apocalypse that John spoke of it's so like it."
"...we the people have to stop them. We cannot endure this. And we can't be peaceful about it.  Yes, we must pray God because we won't have this victory without Him, but we must fight, okay?"
"Alas, though, billions of people are so stupid they're going to let themselves be murdered in the next few years by these maniacs.  And we can try to talk sense into some of them but some of them don't want sense they're completely blinded."
The are completely blinded by their un-knowingness. By their misguided faith in the upside-down world.  They are suffering, perhaps, the strong delusion.  The priest says something else which I think is exceptionally important to hear and absorb.  He tells us that we as Christians have been fooled into believing that all violence is a sin.  I agree.  It has been part of the grad deception, and we must re-learn the truth about the question of the use of force against out enemies.
Whatever happens going forward, I can rest knowing that my work has been to try to open some eyes before it is too late.  Perhaps my own 'blindness' is a sign from above that that part of my work is over and a new one *must* begin.  No more talking about it.  I need to switch gears and create work for those who already see and who want to move forward.  Yes, we must fight but also we must imagine and build the world we want to inhabit.
Here is the full video.  Let me know what you think in the comments.

Abdul
In 2010 there was a conference in the Atlas Hotel 1600 guests were served 800 Fatima heads. All the guests were executed.
2017 Princess Lalla Salma Dissapears.

And now to home: Sean Quinn paramilitary attack, Farrakhan, Scientology, WICS, Gadaffi, Salmam and Maktoom behind the faux Irish Islamic Cultural Centre run by peadovore Nooh al Kaddo. A facility used for trafficking everything next door to a pool.

www.uclg.org is an organisation of radicalised town leaders who believe climate control can be achieved through genocide.

Underneath these stories is I believe a genocide that began in 1993 under the cover of the Human Genome Project, 64 Sites in 44 countries. Apartheid Killing Machines producing orphans for war, science and organs.

If you are interested in digging more into this please get in touch.

Mocro Maffia in my opinion is a HSBC/Rupert Murdoch/Pentagon production.

Abdul
Not my real name, a friend sent me a video of you talking about such things and mysterious deaths in Ireland. I am an Irish tourist who came to Africa and walked into a living hell. What transpires to be a node in the largest peadovore cult the world has ever seen. I use peadovore over satanic or peadophile because eating a 23 year old brains as a cover for organ harvesting is a cash for souls business. What i have discovered here first hand is unimaginable in fact the english language does not have words to describe many of the new crimes against humanity that have taken place here. In 1972 Sea Org ... A cover for MK Ultra arrived in Tangier with 'Fatima' they began farming. 1600 souls a year were harvested in the begining. In 1993 Abdul Karim a phantom serial killer made up of 5 militia was introduced to the farm in what was a major expansion operation brought about by funding for the Human Genome Project and harvesting increased to 16,000 a year. By 2016 there was a total population of 320,000 orphans some were orphaned in MK Ultra Killings these orphans are not being raised they are being farmed, many are test tube babies and many are what are called here 'Kinitra Babies' after the experimental nuclear reactor. I have seen clone sets and i have seen the children of many famous football players. Unfortunately the same year an executive decision was made and only 149,000 survived. I believe this has everything to do with Mossack Fonseca, Jeffery Epstein etc, Apollo, HSBC.

Squrtcap
This Catholic Brother, he may be a Priest is part of a Catholic movement to bring back America before the signing of the Constitution. As a Catholic resorting to violence in offense is not good. We need, especially us retired people, to fight with truth, the Word of God and only participating in lawful orders from any source. Read Holy Scripture ever day, pray for our enemies, we have so many, some in our family. We will win with Charity, much easier than war or violence.

KB
I saw this video a while back. It really spoke to me. But what I find myself thinking more and more about is finding a community of like-minded people who want to be free and have meaningful human experiences. I look around at all the masked fearful who seem to want to be told what to do and not think but rather just consume.... like machines. They are told what to buy, what to do, what to think and they just float about the world doing exactly what they're told. But they don't seem happy to me. I think the way forward is for truth-seeking people to mass together and carve out our own way of life. We have done all we can to awaken these zombies. They will drag us under if we stay as islands among them. I'm ready to forge new ground. (Btw--The only thing important enough for me to don a mask was to get glasses so I could read again. Every other refusal of service I've walked out... but reading. So essential.) If you haven't seen this.... it's my virtue-signaling community to a tee (funny): https://www.youtube.com/watch?v=0tH1p8Bnmwc

susan gortva
thank you. my mother listens to MSM only. I've sent her many informative articles. she thinks I'm crazy. she won't even talk about it. we still see each other but very short visits. so sad.

I admire your work!

irenne Froese
It's great to see a Priest present truth. Thanks Polly, this will probably wake many a Catholic. YET, i feel we who know that Jesus was God incarnate, and that he's coming to set up His kingdom, and if we've surrendered to His dominion in our hearts we are ALL ROUND WINNERS.
live of die. This is so much a part of the great awakening. Soo many seeing the truth of the peace that passes all understanding when we stand in Christ. It's not about freedom of all religion, it's about Jesus only . Perfect love casts out all fear. who's got perfect love? All those accepting Christ in their hearts, because God's the one with perfect love, shown so well to us all in His giving His Son to die in our place. Now we've assurance that sins darkness is dealt with. in each of our hearts.

Lora Jean
Dear Polly,
Thank you So much for all of your research and insight, to connect the dots bringing such great wisdom! I started to watch your videos before the fake pandemic began, and it was a comfort to hear your words! I have always researched on my own, since our 4th child had been diagnosed with autism. We were able to reverse the symptoms with diet and holistic measures, for an untreatable disorder at the time. It sent me on a quest to understand the reason for his condition, and found the connection with vaccines and learning disorders. That was almost 23 years ago, and our son is now living on his own, working as an electrician, and can fix about anything from generators to snowblowers; is mechanically inclined and repairs and builds computers, also. He plays the piano by ear, is generous, compassionate and helpful. I agree with the priest and his warning about the Covid jab! It is very disturbing to see the push for these in our country, and around the world! I always encouraged people to ask for the package insert before getting a shot for their children or themselves. We read the labels on our food before purchase, but why not for something that is injected directly into the bloodsteam?
I agree that we have to defend our family with force if necessary, but we must peacefully protest at the local level, including civil disobedience. Especially the ridiculous masks and lockdowns! We have to push back with all our might.
Blessings and Lov...

Michael Hoffman
I found this a couple weeks ago and wasn't exactly sure what to make of it. We unfortunately need to be so careful in who we believe/trust these days. However, after watching it a second time here, it clicked for some reason. He seems totally credible and gives his thoughts from a completely different point of view than I would initially have, but it melds completely into one view; the same view. We are at a point where we have to fight, literally. Very few words need to be spoken anymore. Action is what's required.