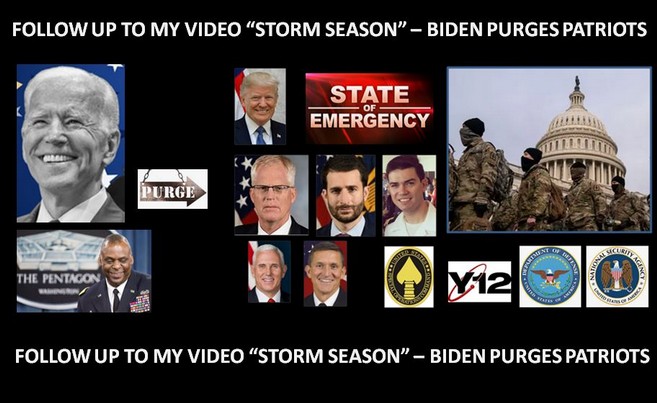 Hmm, you don't say.
Biden's first moves included getting rid of the very people I featured in my recent video entitled "Storm Season."
As soon as Biden was sworn in, Gen Paul Nakasone took out Michael Ellis.  Ellis is the man then Acting Secretary of Defense Chris Miller had ordered to be installed as Head Legal Counsel for the NSA.  In my video "Storm Season" I had talked about why Ellis's new position might be significant.
Placing Ellis on administrative leave was the best they could do since this was not a political appointment and as such they can’t fire him easily.  Dirty, dirty.
Read more at link:  https://www.sott.net/article/447610-Breaking-norms-and-precedent-Biden-attempts-to-purge-career-intelligence-official
As if on cue, Vanity Fair came out with a lengthy piece on both Chris Miller and Ezra-Cohen-Watnik, the two other Trump Admin players that I included in Storm Season. It appears to me that these men are potentially very influential and the mainstream media wants to try to win them over to the Biden side or at least neutralize them by giving the public the impression that both Miller & Watnick can be brought in line.
The first half of the article paints the two as jumping ship on Trump but read on. The last half is where the story gets more interesting.
Shockingly (or not, if you consider that Miller/Cohen-Watnik are Special Operations veterans, skilled in Info Warfare) Vanity Fair’s Adam Ciralski was granted permission to be ‘embedded’ with Miller during his final days on the job. The article is the result of the reporter's experience during that time.
I would recommend reading the whole article but couple of items that stuck out to me are below.
Miller takes Ciralski on a visit to the Y-12 National Security Complex in Tennessee.  Oak Ridge, Tennessee, to be precise.  Why is this interesting?  Because, if you recall from the Nashville Bombing story I did, the lawyer for the girlfriend of the  alleged perpetrator of the Nashville Bombing is a man named Throckmorton.  Throckmorton used to be mayor of Oak Ridge!   To my eyes this connects Throckmorton to two major data collection / storage centers in Tennessee - the one at AT&T and now the secretive base at Oak Ridge.  Curiouser & curiouser.  To learn more about this please see my video 'Nashville Dig.'
It's really towards the end of the piece that we get a flavor for Miller's take on Trump and the general state of the Military/Defense department in the US.  According to portions of the interviews published by VAnity Fair, Miller believes that there is a division between the Forces and the political military such as the Joint Chiefs and some Top Brass.   Miller tells the journalist that it has become compartmentalized, and alludes that this is done on purpose and somewhat underhandedly.  When I read it, the phrase that popped into my mind was  'Deep Military' (no, Miller didn't use that phrase).  The Deep Military purposely keeps information away from Congress and the Executive branch leading to all sorts of disastrous decision making and failed policy objectives.
The ending paragraphs reveal the most telling moment of all. I’ll let you read it for yourself but suffice to say that I would probably enjoy having lunch with Miller’s wife.
Also remember as you read that Vanity Fair is the magazine which covered (laid the narrative for ) Jeffrey Epstein back in 2013, leaving out any talk of Epstein’s accusers. IOW: when reading Vanity Fair be conscious that you’re reading spin crafted at the highest levels.
Read the whole article here:
https://www.vanityfair.com/news/2021/01/embedding-with-pentagon-leadership-in-trumps-chaotic-last-week
Don't forget to check out my videos on Bitchute, look for previous blog entries here, and if you like what you see you can support my work by sharing, leaving a comment, or contributing in other ways HERE.

wendy
Maybe Trump should have done the same got rid of heaps of them. I do not understand. the American Military say that they are loyal ONLY to the Constitution. If that is true given the Times story and the obvious election fraud, why are they not up holding this Constitution. They are really the only ones who can fight this massive operation. The ordinary American cannot do it. Obviously they are full of Sh.. like the rest of the swamp.

beechbaby
The Biden purge is consistent with Dem operations. Both Clinton and Obama had multiple puirges of our senior leaders and used DoD as a social forcing function. Unfortunately, many of our leaders were "young pups" beginning with Clinton and that ethic is permeating the force. Our leaders are no longer outraged by any of this.

Karrie
Thank you. Yes, that Vanity Fair article was very intriguing on many levels. The smearing, the narrative, the projection...makes me want to find out who the "keeping-an-eye-onners" are from the Biden camp.

And how very interesting that a 'former' CIA agent *cough* turned journalist, and was furthermore able to get access to Pentagon staff...(and unnamed 'sources')... murky as....

I, too, would love to have lunch with Mrs Miller...and certainly NOT with Mr Vanity Fair.

Patti
Another great video, thank you Polly. Wondering if you or anyone else here can find someone. I am trying to find out who the husband of The WHO's director of the immunization, vaccines, and biologicals department. Her name is Katherine O'brien. There are just some interesting things about her. One of them is that wikipedia and other bios mention her kids names but never her husband's name who the bios say he is an adult infectious disease expert focused on AIDS/HIV. Katherine was born in Canada. Thank you so much.

Have you sent your latest video regarding the DC restaurant to Sydney Powell? She is on telegram. Thank you.

Pistol
Polly, I am a person, that still has hope, in America and in good american people, all the hype about Q not being real, somehow goes away when I listen to you. Keep giving us hope, that and prayer is all we can cling to. Thank You, for all you do!

This should be interesting:
QAnon: Blood Libel for the Digital Age, with Stephanie Kemmerer

I signed up for this talk as I'm looking forward to be able to politely counter the smears.
Might you join me?

Judi
You are fun to listen to, through thick or thin.

Are you familiar with the Canadian Admiral William Guy Carr?
If not, may I please urge you to listen to his talk from 1958 in Chicago
https://archive.org/details/PawnsInTheGameLecture
I believe you will find valuable information and hope that you can talk about it and urge others to listen as I believe this lecture explains how we arrived at this point in time. We are focused on communism but communism is the conspiracy within the conspiracy.
Thank you.

George Weigle
Throkmorton was Mayor of Oak Hill, TN, near Nashville, not Oak Ridge.
1 2 Next
Recent Posts
Monthly Posts
Back to content