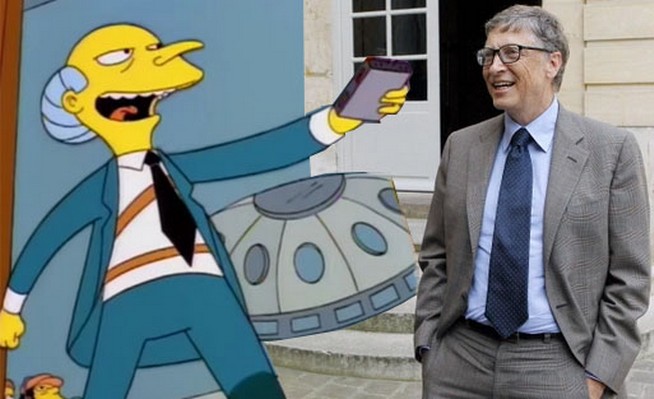 Bill Gates is the real life Monty Burns, wanting nothing less than total power and never ceasing to invent demented villainesque schemes such as feeding people fake meat made from GMO yeast & a soup of chemicals, blocking out the sun to cool the Earth, turning feces into drinking water, and branding people with dyes in order to track their status as they move about their lives.  Now we hear that he is the largest owner of farmland in the United States. Control of the food supply goes a long way to control of a nation's people so it is chilling to learn that Gates can decide what, how much, and whether or not people eat.
If you aren’t familiar with the character Monty Burns, he’s the bad guy boss of the Nuclear Power Plant on the long-running ‘adult cartoon’ television show called The Simpsons. I see a resemblance to Gates not only in the caricature but also because, in the show, Burns never stops trying to wage an underhanded, covert war against the people of Springfield including a plan to block out the sun!  It was funny when it was fiction.  By the way, Bill Gates is also heavily invested in mini Nuclear reactors. (Has anyone looked in to whether or not he is enriching Uranium?  Just asking.)
It has been speculated that Social Justice Warriors (SJWs), Antifa, EcoWarrior groups like Extinction Rebellion & BLM are the Marxist arm of the Globalists. Many believe that Marxism or communism is the end goal and that the groups mentioned above are the militant arm of those forces. They believe that if we can simply make people see the SJWs for what they are then we will return to capitalism & individualism, we’ll be free from cancel culture, collectivism and government over-reach. But my read of the battlefield is quite different from that.
Top technocracy researcher Patrick Wood has been warning for years that today's Marxist Insurgents are merely a useful cover for the Technocratic powers beneath the surface; powers who do not care at all about the rights of minorities or the environment and whose vision of equality is to have a small ruling class presiding over the global population who will all be equally enslaved by them. Technocrats are mostly found at the top levels of corporations and non-governmental organizations but they are also heavily disbursed within academia, the news media and in the technology sectors. This group hopes to emerge as the winner of today's undeclared, asymmetrical World War. They have provoked a crisis of clashing ideological priorities through manipulation of public perception, the funding of radical groups, setting the education agenda in public schools & universities, elevating unscientific ‘science,’ and censoring & demonizing opposing voices and they have kept themselves well hidden in the chaos until now. I am in agreement with Mr. Wood’s assessment.
Klaus Schwab and Bill Gates are two of the major leaders of the Technocrat Insurgency. They emerged from the shadows at the moment of arrival of COVID19 as if walking down the ramp of Spaceship Corona.  They didn't need to demand, "Take us to your leader!" since these men have been collecting leaders all of their lives: paying them well, ingratiating themselves, financing government projects and steadily building a network of high-placed players around the world.  Both have referred to COVID19 as 'an opportunity.'  Both are calling for drastic & horrifying measures to contain the virus which they claim will never go away.  It is from their PR specialists that we get the term "the new normal." 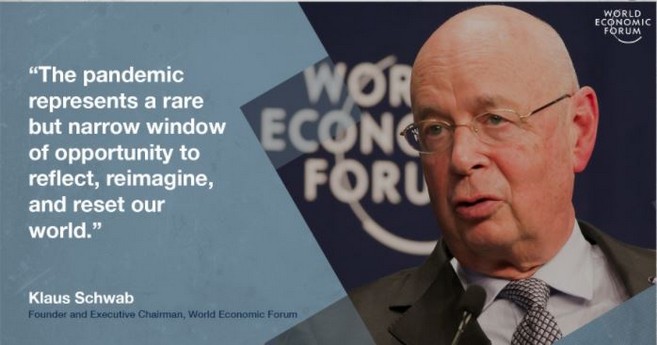 Gates appears on all the major TV networks and in the pages of big name newspapers where they treat him as if he is a bona fide medical expert rather than the college drop-out that he is. In his nasal whine he strings phrases together incoherently on matters which affect his own investments in drug companies, often waving his arms over his head like a chimpanzee.  He and his wife Melinda smirk as they talk about lockdowns, masks, vaccines & their hope that something they do will drastically reduce the global population so that we can get to "Net Zero" carbon emmissions.  The couple warn that the Western World has not done as good a job as China in controlling their citizens but that  there will be a 'second wave' of the virus which will be sure to 'get attention this time." 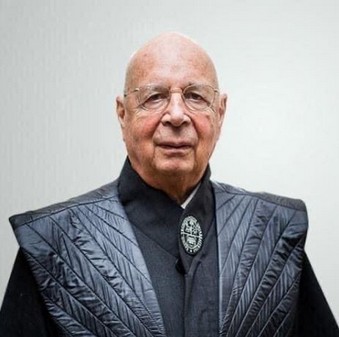 If Bill Gates is Monte Burns, Klaus Schwab is Blofeld. Schwab founded and runs the World Economic Forum (WEF), an exceptionally powerful non-governmental organization (NGO) based out of Switzerland where the DAVOS Forum is held every year.  He has laid bare his version of “a new normal.’ He calls it “The Great Reset” – a future where “we will own nothing, and we will be happy.”  In his technocratic nightmare almost none of us will work, we will live in tiny rented apartments (which we will time-share with others), AI will provide everything we need, we'll get used to eating 'micro-protein' (insects) and nature will be off limits to us.  I know what I've just described is horrifying, but it's just the tip of the iceberg.  See this WEF article "Here's How Life Could Change in my city by 2030" for another glimpse of the insane future these people want for us (not for themselves.) Incidentally, that article used to be called "I own Nothing, Have No Privacy, and Life has Never Been Better."  The google search result still returns the old title, as shown below:

Gee, I wonder why they changed that title after almost 4 years of leaving it as it was?
These people are so deep in their ideology that they have become blind to how repugnant they are to the general public.  The WEF operates more or less as a cult, and everything they've published reads to outsiders as off the wall sci-fi dogma.  Their answer is to this PR disaster is to try to censor opposing views and deny their own past words.  In my own opinion, they will not be able to do so. Their tracks are everywhere, they've published untold numbers of articles and reports and their history speaks for itself.  Normal people are universally revolted by them when they take ten minutes to find out what the WEF is really all about.  My favorite example to show people is this video from the WEF itself about the 4th Industrial Revolution.  Right off the top, a female member states: "The very idea of 'human' being some sort of natural concept is really going to change."
The visions Gates & Schwab lay out are nothing even close normal.  They barely qualify as human. Neither do these visions resemble in any way the obscure promises they've made to BLM, Antifa or the Climate Activist extremists when they pretend to be interested in justice. In the Great Reset Technocrat future we will all be equally poor & powerless. There will be no protest movements. There will be no free speech or freedom of assembly. The environment will be locked away from us and their promise to end to catastrophic weather events and pollution will never be mentioned again.
Technocrats created or at least used these dangerous mobs so they are well aware of the threat they pose.  The militant SJW groups have training and the means to potentially turn on the Globalist Technocrats once Trump is out of office. That being the case, it makes sense to assume that Antifa, BLM, Extinction Rebellion, (and even seemingly far right groups such as the Proud Boys) etc are about to be dispensed with no matter who has the reins of power in the United States. If Trump somehow retains the Presidency (or regains it later) he’s not going to allow a repeat of what we’ve just seen happen in the United States over the past 5 years. He will arrest them all. If Biden is sworn in I think we’re looking at a Technocrat government and, having gained the power they wanted most (command of the US Military,) they will put down the SJW Radical Threat they themselves created, agitated and funded.
The night of the long-knives is near.
Polly St George
References for this piece are contained in the links (colored /underlined text in article). Click on these to take you to the original source documentation.

Stephanie Coates
Good morning. Just want to say “hi”. And to tell you I heard Juan O Salvin and Robert Steele tell people how great you are. It was fabulous. Have a great day. Mike Morales says your in the deep freeze. Take care. “S”

Joe blow
Peace out? Ugg. Try something like have a nice day or bye for now. Peace out is not something your age group would say. Try later. Catch ya later. Etc. wow.

Tom
I wonder what will happen to his constantly inane grin when he's wearing the inevitable orange-jumpsuit in GITMO?

Jane
How can I forward this to some of my family and friends?
Awesome work!

ELTV
Love the posts however the video on NOT-FOR-YOU tube think it is another way they will censor the information and we deliberately steer clear of. Great work as always and thank you!!

Andrea Black
Hi Polly,
Love your videos!
Just wondering if you saw the Good Morning America video from Jan. 18 with Commander William Wallace in which he slipped in a comment about the National Guard being there to ensure a peaceful transition to "military power." Then he quickly moved on.
It's on ABC news. Go to videos and scroll down "Head of DC National Guard discusses inauguration security."
Kind of exciting!! Here's hoping and praying!

David Buchner
Great piece. I've been trying to tell my family and friends for YEARS that the bad guys are all Bond villains, but they always just roll their eyes. That photo of Schwab is even more hilarious than Hillary in the Nehru jacket.

I really still believe they won't win, though. And, I enjoy your videos but rarely comment.

Mindy Maucelli
Polly, I absolutely love your work! You tirelessly deliver facts to your audience and always with a smile, I appreciate you and I’m glad I found you after they purged your work from YouTube, I’ve followed you for so long and just happy that I’ve found you again. You have my email now, send me updates any time!