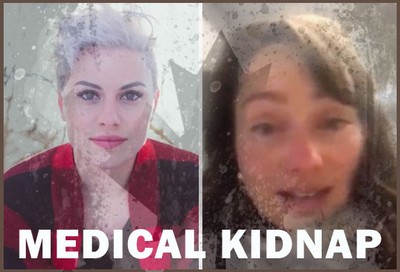 I know of two cases so far, both out of Alberta, Canada, where people have gone to pick up relatives at Calgary Airport only to have their loved-ones whisked away by unidentified "officials" and who refuse to provide any information about what is going on.  The citizen-detainees are then taken to local hotels where they are threatened with up to 6 months in prison if they attempt to leave the building.  In the meantime the relatives of the citizen-detainees are treated like co-conspirators in a mysterious crime - they are not given any information about what is happening and they are left to turn to media and social media to try to get answers.
Here are the two stories, as told by The Western Journal:
- Red Deer mother in tears as son taken to undisclosed isolation centre
- Calgary police take travelling woman into mandatory isolation, but refuse to tell family where she is - The Western Standard (westernstandardonline.com)
It has been alleged by the husband of detainee Nikki Mathis that two major media outlets in Canada, CBC & CTV news, have been instructed to ignore these stories.  I just had a look to confirm and see that CTV News has now run a piece on the kidnap of citizens from the Calgary Airport.  Here's a slice of it for you so that you can see the angle they are taking.
I hope no one ever uses this fool as their lawyer because he seems to be making things up as he goes.  I suspect the purpose of this article is to dissuade Canadians from seeking legal remedy for this obvious trampling of multiple of their rights. 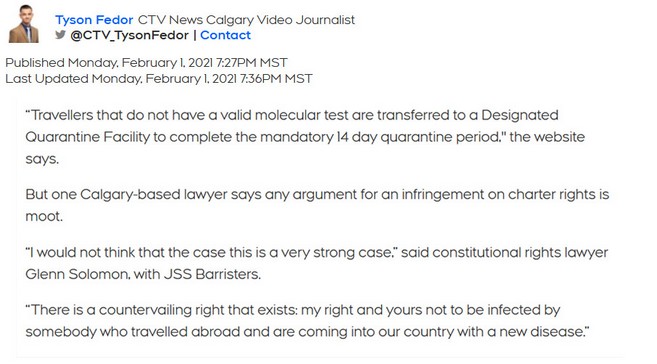 The "crime" these people committed was to obtain an 'unnaceptable' COVID test result.  Unacceptable? Oh I see so now the government can move goalposts on whomever they like whenever they like!  These two citizens obeyed the (brand new) Federal mandate that anyone returning to Canada must get a negative COVID test result or else face quarantine on arrival.  Well they *did* obtain a negative test result, but Big Brother wasn't satisfied - Big Brother wanted them to get a specific sort of test and they failed to meticulously read the news items to figure that out before they got on a plane to come back to their home country.
When I read these stories I can only come to the conclusion that a sticky ball of red tape has replaced the hearts - and the brains - of everyone in positions of authority in this country.  When will the zombified, complacent masses here say enough is enough?  Perhaps only when their own children or spouses are taken by force from their homes or workplaces, put into detention facilities and then handed the bill for the whole debacle. (If the coverage of this is accurate, it appears that people have to pay out of their own pockets for this treatment!)
The story is developing but to learn more I offer you the below video uploaded by Nadine, who does a thorough job of covering what has happened in one of these two cases.  She also has the properly emotional reaction to the situation, in my opinion!  (Be advised that there is a horrible blasting alarm sound in the first seconds of the broadcast.)
Let me know what you think in the comments section.

MC
IMHO it looks like AB is one of them. These folks took the Covid test, both were negative.
Who is going to be the first one led to slaughter?

Michael Hoffman
My new heroine. Please come to the States.

Really appreciate all of your fine work. I may not always agree with the conclusions you draw, but your ability to join the dots is first class and your genuine compassion, heart and soul is abundantly apparent in all of your work.

In regards to the specific topic, whilst it is completely appalling that citizens are being treated this way, I think we need to start make wiser choices. Rightly or wrongly, these are the consequences that we will have to face, and no matter how much we complain, until a significant uptick in brain use among the populace occurs, it won't change. Given that, we need to get out of the victim mentality and take responsibility for the actions we have taken and for the actions we choose to take going forward.

To be clear, that means if you choose to fly anywhere, know that this sort of treatment may very well await you upon arrival, and accept that. Don't complain when it happens, because you know that it can. Once it does, know what your response will be. Will you just allow yourself to be hauled off, or will you dig your heels in and fight, knowing full well that unpleasant consequences are likely to result from either of those choices?

Likewise, you can choose not fly anywhere are remain a prisoner in your own country/province/town. Either way, you will face unpleasant consequences, so make sure your are fully aware of what those consequences are likely to be and what action you plan on ta...

boudica
This is illegal even as per the quarantine act. NOTE 14(1) only can use screening that does not involve entry into the body of an instrument or foreign body.

12 Every person who is subject to subsection 11(1) of the Customs Act and enters Canada shall, immediately after entering, present themselves to a screening officer at the nearest entry point.

13 Every person who leaves Canada through a departure point shall, immediately before leaving, present themselves to a screening officer or quarantine officer at the departure point.

Marginal note:Refusal to be screened

Johanne Howard
This is nothing more than extortion and payment to off-shore proprietors of these hotels. None of this acceptable for ANY reasons. Tyrants have taken over our country. Their depopulation program will only get worse if it is not stopped. Forcing people to submit to lies and language spells is only the beginning.

Dray
Hi Polly,
I love your insights! Have you seen this survey that was conducted? I worry what is in store for us.
https://www.campaignresearch.com/single-post/national-omnibus-study-february-2021?fbclid=IwAR1DKzqBsanbq2nASbIHju2h5KcZR7FuSwcv6tmJRWr3WhealCRFThTOrLo

Richardsciuk
Only Suzanna Maria Emmanuel can explain this satanic tyranny and offer the only solution..in this time of prophecy...we have until 2032 to make the choice to free us from the holographic dark matrix we exist within

Jane
Where is the opposition in Canada for this They have done nothing.

Heidy
Dear Amazing Polly,
Thank you for your amazing work of looking behind the smoke screen. I have only recently discovered your website, but have been aware of the fraud since April last year.
In case you don't know yet, you may want to know that the same PR company that was behind the incubator lie (check Wikipedia for "Nayirah testimony") leading to the US attack on Iraq was hired by the WHO last May to be in charge of the global PR for the plandemic. The company's name is Hill+Knowlton Stragegies (hkstrategies.com). I hope you will be able to get this info out to other people. This should be public. I feel like yelling it from the rooftops!
Many thanks.

Christine Bremner
Excellent!
We need to stand together.
Thanks Nadine.
1 2 Next
Recent Posts
Monthly Posts
Back to content