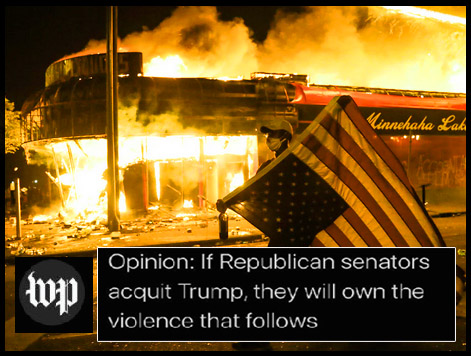 In my latest video “Election ‘Fortified’ by Secret Cabal",  I looked at the recently released TIME magazine article exposing the well funded group of Deep State political operatives who conspired (yes, TIME used that word) to 'fortify' (their word) the 2020 Unied States election.
They used their wealth and connections to manipulate public opinion, control the flow of information, get millions in funding to state legislatures, pressure them to change laws and purchase new voting machines and more. This same group continued after the election and during the certification process to engage in what amounts to organized stalking and harassment of elected officials.  If you saw the video you'll know I went on to examine all of this as a manifestation of an anarcho-tyranny, and while doing do I mentioned the logical fallacy called argumentum ad baculum.
Argumentum ad baculum is the use of a threat in an attempt to ‘win’ a debate. Obviously this is cheap, lazy and shameful behaviour and no debate can actually be won by brute force. Any upstanding panel would instantly disqualify a debater for pulling such a stunt, but, apparently, it happens often enough that ad baculum is listed as an official logical fallacy.  Here's a very interesting read on the term's history:  Logical Fallacies 101: Ad Baculum
Outside of the debating context the use of threats to get one’s way in other areas of life and society is known bullying, abuse, intimidation and/or coercion.  These often carry criminal or civil penalties.
What name do we give to those who issue threats in the name of influencing political outcomes, coercing a citizenry or intimidating a government? We call that sort of thing terrorism. 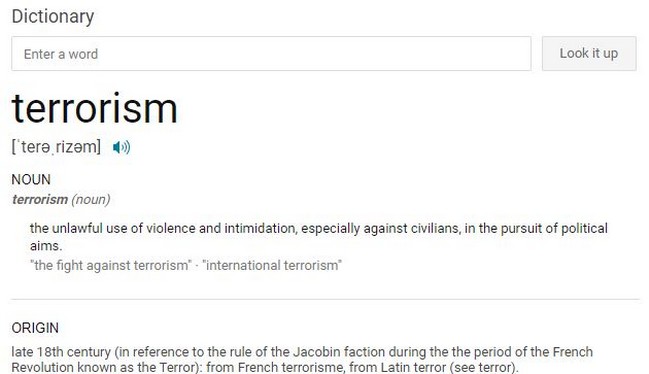 With that in mind, have a look at this headline run in the Opinion section of the Washington Post. 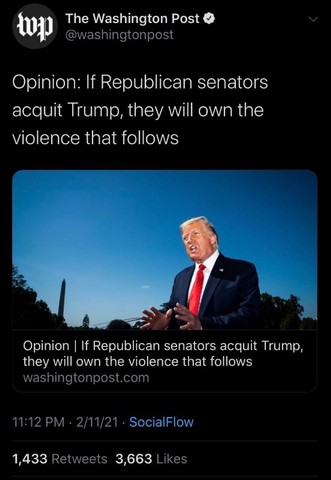 Sounds like a threat, but the author was clever.  He’s framed the piece as if acquittal will give license to Trump to whip-up violence against his opposition and, the writer implies, Trump’s base will do just that.  He knows, however, that it would not be Trump's base who would take their grievances to the streets, it would be the far-left activists who have likely planned to repeat the summer riot-waves in the event that the impeachment doesn't go their way.  We saw the very same plan in the TIME article, where the powerful cabal admits that the months of rioting by BLM & Antifa before the election were used as a demonstration of what 'people power' (their phrase) can do to impact business & civil cohesion.  They confess to TIME that they had those very same 'activists' on speed dial, ready to 'rise up' in 400 locations across the country. 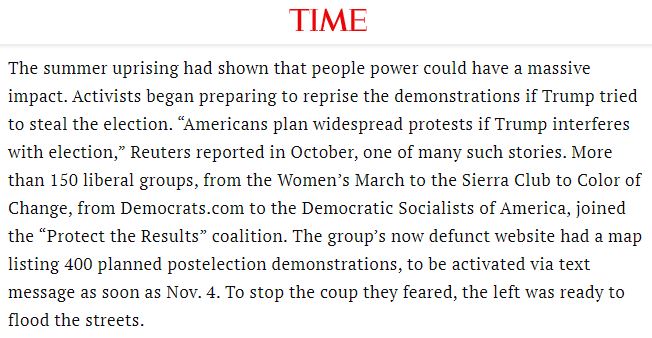 It’s a classic  tactic which the Far Left & the Deep State use all the time: accuse the enemy of that which you are doing. (Side Note: This tactic has been attributed to Saul Alinsky, Karl Marx and Joseph Goebbels. Anyone know where it really comes from?)
In the faux-impeachment hearings yesterday (Feb 13, 2021) Trump’s lawyers skewered his accusers by showing 20-something minutes worth of elected members and celebrities advocating for beatings, murders, rioting & more. It was fantastic! Finally, the world got to see how the Left has selectively edited the news to create false impressions of the former President's speeches and actions. Finally the world got to see what had been banned from social media! Finally they heard the violent rhetoric from the Dems, the encouragement of BLM riots, and the double-standards.  And finally mainstream news had to answer for it as they struggled to excuse their allies egregious behaviour.  Their defense, weak as it was, amounted to "Yeah, our side says some goofy stuff but it didn't result in an Insurrection!!"
*sigh*
I haven't watched one minute of the Impeachment hearings live, so I'm grateful to those who have, and who took the time to compile outtakes for the rest of us. Salty Cracker (YT channel) strung together a section of the trial so that we could all watch the defense in action. Here’s a link to that video (I’d recommend skipping over some of the section where they start to show how many times Dems used the word “fight” because it seems to go on and on forever) 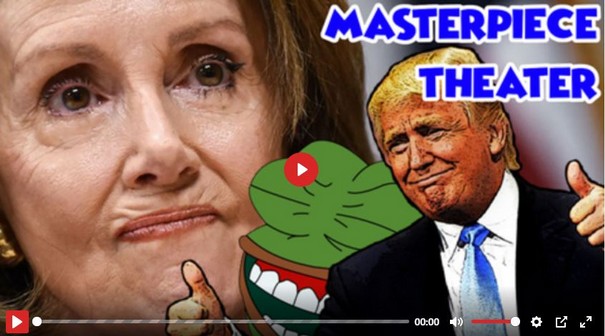 https://www.bitchute.com/video/6I5PKZi7gOim/
Will the media being forced to cover this have any impact on the general public who so far seem largely fast asleep to the machinations of the Deep State against the people?  I am optimistic.  Truthful information is powerful and once people's eyes see it, and ears hear it, their hearts are soon to follow.
~ Polly

Janice Kadarski
Hey 2cents, you and Polly better read that article again without a bias towards Democrats. Because that article CLEARLY says that the election was not rigged, and this group of powerful participants did whatever they could to ensure the true results were strengthened and secure (fortified). Anyone reading this I warn you not to listen to Polly's misleading interpretation of information like this to create a conspiracy that isn't real.

2cents
JAnice + Ed - if you, let alone the left, don't believe that there is a "deep state", what value does it have for Trump to make that announcement? Did you completely miss the Time Magazine article talking about a secret cabal (their words), that "fortified" the election? Considering the source and the writer, what more evidence of a group of unelected people fighting against the will of the People do you need? The problem is, people imagine the term "deep state" as a group of faceless, evil, comic like people. It is in fact people like Joe Biden, who is the face of the deep state (establishment). Put it this way, if you had all the money in the world, what WOULDN'T you do with that power you could wield?

Janice Kadarski
I agree with Ed. I was a big follower of yours Polly for the longest time but now I think you're going off the deep end. If there is a deep state then how can they be any more powerful than the Senate. The President and Senators seem to have enough trouble pushing legislature through, how can a secret cabal of people make any changes? Im beginning to think that all this conspiracy theories crap is being pushed by people like yourself that are looking to make money off the vulnerable people in the world.

KB
You ask.... Will the media being forced to cover this have any impact on the general public who so far seem largely fast asleep to the machinations of the Deep State against the people?
I would say, not a chance here where I live over the short term. Things have to get much much worse here in San Fran and it's already in a state of complete dysfunction and decay. Many people here have the means to just leave so there will be an exodus without the connection ever being made. (I may be among those fleeing soon. Though I might stay and battle on, I can't sacrifice my children to do so.) That said, I think the majority across the country who see what's happening will continue to grow. Once former San Francisco inhabitants hit other areas of the nation, their programming will become more and more difficult to maintain. The truth will come out. I, too, remain optimistic. You can see the fear now in the actions of the establishment. So desperate to censor, disarm, quarantine, and shut us down. But they are too late. We have reached a critical mass and the awakening can no longer be stopped.

Paul Caldwell
Your insights are dead on- Optimistic an understatement
When I was was in the Navy, the junior officers I served with were mere Lieutenants, now they’re Admirals and NSA officials..... hence my insights to follow
1.... NORAD- (castle rock) is still locked up in maximum defensive position. The military does not support JB
2....The sham impeachment had to conclude before the following revelations come out
A- Miramar will announce the dominion voting machines proven to be source for vote rigging in election
B- Durham Report Released- confirms JB crime family with direct link to China CCP funding and Ukrainian money laundering
3...Dark to Light - once the info from Miramar is released, a major network (I think Fox) will openly question the revalence to our election
4....with the above info- the SCOTUS will be compelled to hear all 3 cases earlier than expected
5....There is an inauguration scheduled in Florida for March 4, Try getting hotel room - price/Availability.
Thanks for all you do. 🇺🇸🙏😎

Paul Caldwell
Your insights are dead on- Optimistic an understatement
When I was was in the Navy, the junior officers I served with were mere Lieutenants, now they’re Admirals and NSA officials..... hence my insights to follow
1.... NORAD- (castle rock) is still locked up in maximum defensive position. The military does not support JB
2....The sham impeachment had to conclude before the following revelations come out
A- Miramar will announce the dominion voting machines proven to be source for vote rigging in election
B- Durham Report Released- confirms JB crime family with direct link to China CCP funding and Ukrainian money laundering
3...Dark to Light - once the info from Miramar is released, a major network (I think Fox) will openly question the revalence to our election
4....with the above info- the SCOTUS will be compelled to hear all 3 cases earlier than expected
5....There is an inauguration scheduled in Florida for March 4, Try getting hotel room - price/Availability.
Thanks for all you do. 🇺🇸🙏😎

Joan Hastings
much love to all on this 45th day of the year....

Yoni Reinon
A political system in which money reigns supreme, will always get to the same outcome. The Bushes, backed be the Petrochemical cartel they led and the military industrial complex, rigged the election two decades ago, and produced the bloodiest false flag attack in history (by the way, how many peoplw drowned in the Titanic?). Now it was time for the Dems. They made it with the support of Big Money, Big Tech, Big Pharma, Big Media, Big Agencies. They had all the aces in their sleeve. Trump just need to make himself useful to the British sionist financeers in London and he will come back. Il money rules, the people will never rule.

Lynn
The real power lies with "WE THE PEOPLE"! Some how, over nearly 2 + 1/2 centuries, we have gradually set our freedoms aside to acquiesce and capitulate to the louder voices of BULLIES craving power and control OVER us. In the intervening years, we've inconveniently 'FOGOTTON' about the freedom we demanded AND WON from King George as we secured our independence as a sovereign nation; added to that, we forgot about the freedoms we fought and died for in the Civil War; and predictably again in WWI and WW2 and 9/11, 'we the people' became more & more forgetful every decade and war ever since, Now, 'we the people' have fallen into the current conflict & are in grave peril of losing ALL our freedoms to a ruthless vile, vicious enemy, the Deep State cabal.... America, time is of the essence and 'We the People' must end their theft of our precious freedoms! 'We the People' will NOT sacrifice ANY of our freedoms or our children's future to any person, king, con man, buffoon, foreign country, corporate cabal, or devious zealots. We the People know he won & CHOOSE Donald J. Trump.. PERIOD.
1 2 Next
Recent Posts
Monthly Posts
Back to content